How to tell the difference between arabica and robusta

Growing regions, flavour and appearance: the rich diversity of the coffee bean

Coffee know-how in a nutshell for experts and beginners: here you can read everything you need to know about the coffee bean. Discover the characteristics of a good bean. And learn how easy it is to spot the difference between arabica and robusta.

If you ever tried to grow coffee beans at home, you’d be destined for disappointment. After all, coffee beans are incredibly sensitive souls. They need the temperature to be constant. The coffee tree requires enough sunshine, but also sufficient amounts of rain. These very specific climatic conditions only exist in a very specific region. And that’s near the equator – or to be more precise, from 23 degrees north to 25 degrees south of the equator.

It’s the only region that has this tropical wet and dry climate at various altitudes – and this is perfect for our coffee.

The arabica bean grows at around 16–25°C, is cultivated at altitudes of between 600 and 2,000 metres and has countless varieties.

What all arabica beans have in common is their mild and complex aroma. Arabica has a finer acidity and lower caffeine content than robusta.

It’s also pretty easy to distinguish arabica from robusta beans just by looking at them. Arabica beans are oval and slightly larger than robusta beans. When roasted, the bean develops an uneven and s-shaped groove – also called the centre cut – down its centre. This is a sure sign that you’re looking straight at an arabica bean.

Take a look at the image below: when arabica and robusta beans are placed together, it’s really easy to see the differences.

By the way, a package labelled 100% arabica is not necessarily a sign of quality, but rather an indication of a mild flavour. The most important growing regions for arabica include Brazil, Colombia, Ethiopia and Honduras. 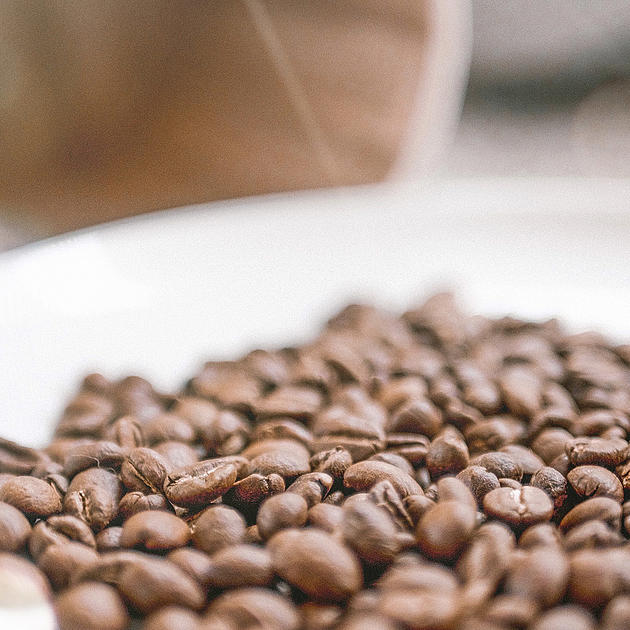 The robusta bean grows in low-lying regions up to 900 metres above sea level. As its name suggests, robusta beans are much more robust than arabica and more resistant to outside influences such as insects and warmer temperatures.

Robusta coffee stands out for its earthy and malty flavour – and contains significantly higher levels of caffeine. In contrast to arabica coffees, you cannot taste the acidity in robusta coffee. Robusta is often mixed with other coffees to add strength and depth to a blend. The robusta bean is smaller and rounder than arabica and its centre cut is straight.

What determines a coffee’s quality?

You yourself play a major role in how your coffee tastes: variety, processing and roasting all play a role of course, but so does preparation.

The coffee beans and their origin are purely a matter of taste: those who prefer complex coffees with a pleasant spiciness go for arabica beans from Ethiopia. Those who like their coffee to be highly aromatic with hints of berries will find what they’re looking for in the coffee beans of Kenya.

Fans of Brazilian coffee are attracted by its pleasant sweetness and often nutty flavour. That provides the perfect base for espresso blends.

As a general rule, it’s better to buy whole beans than pre-ground coffee. After harvesting and drying, the beans are sorted into different quality grades. Often, a look inside the pack will provide an indication of the quality. If the beans are similar in size and colour, then that’s a sign that the quality is high.

It’s best to use up your coffee beans as quickly as possible; after all, oxidation begins the moment the beans come into contact with oxygen in the air.

So has this article put you in the mood for some good coffee? We have a few recommendations for you:

Tanzania Gombe is made with 100% arabica and has aromas of citrus, walnuts and a hint of honey. Colombia Pink Bourbon is a rare arabica variety that has a wonderful fruity depth of flavour. And Espresso India Parchment Robusta is a robusta coffee – intense with aromas of dark chocolate, tobacco and cinnamon.

Cookies for the purpose of analysis: We and our partners analyse how our website is being used in order to be able to better fulfil customer requests and offer specific services.

Cookies for marketing purposes: We would like to measure the range and effectiveness of our marketing measures and increase their efficiency.

We and our partners analyse how our website is being used in order to be able to better fulfil customer requests and offer specific services.

We would like to measure the range and effectiveness of our marketing measures and increase their efficiency.

You have the right to object at any time or to change your settings.
More about this can be found in our privacy policy and detailed cookie information.